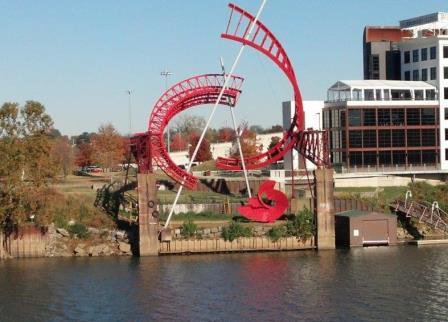 Measuring 100 feet high, 100 feet wide, and 60 feet deep, the award-winning Ghost Ballet steel sculpture brought national attention to the City of Nashville, Tennessee, when it was completed in 2007. That year, the sculpture was selected for Art in America’s Annual Guide issue as one of the top pieces of public art in the nation and appeared in Sculpture, Public Art Review, and Art in America magazines.

The sculpture continued to gain notoriety after being selected as one of the best 50 public art projects over the past 50 years by the Americans for the Arts 2010 Public Art Network’s Year in Review Retrospective.

Located on the east bank of the Cumberland River, the sculpture rests on a gantry crane that once was used to build and launch barges. With its spherical shapes, and striking red color scheme, the sculpture by artist Alice Aycock has become a fixture on Nashville’s skyline.

In comments appearing on the City of Nashville website, Aycock described her creation as a work of static animation. “It changes as you move around it,” the artist explained. “It suggests a certain kind of movement, dance movements, which is why I refer to it as a Ghost Ballet.”

The Aycock sculpture was the first project funded by the City of Nashville’s public art ordinance, which is administered by the Metropolitan Nashville Arts Commission (MNAC). The ordinance dedicates one percent of the net proceeds of any general obligation bond issued for construction projects to fund public art.

Policies for administering Nashville’s public art program are presented in a 30-page guidelines manual that defines the composition and responsibilities of the MNAC and the role of citizen selection panels in recommending artworks for approval.

Under Nashville’s public art program, 40 permanent works of art have been completed and several others are in various stages of planning or construction. The artworks appear in public sites throughout the city including parks, along roadways, libraries and civic spaces.

Prior to commissioning the “Ghost Ballet,” a nine member citizen selection committee reviewed resumes from 155 artists and more than 3,000 slides before deciding on six semi-finalists who were given eight weeks to design and build a scale model of their artwork, develop a budget, and specify a maintenance plan.

In 2014, the “Ghost Ballet” was recoated when the sculpture’s original red urethane finish coat started to fade.

“Red is a popular color used for bridges in downtown Nashville and the NFL’s Titan Stadium,” observed Tiffany Goulet, Tnemec representative with NexGen Coating Resources, Inc. “City officials have seen what happens when red fades over time, so they wanted a coating system with long-term color and gloss retention.”

Rusted areas of the sculpture were prepared in accordance with SSPC-SP 11 Power Tool Cleaning to Bare Metal and the original urethane coating was mechanically abraded.

Red and maroon sections of the sculpture received a coat of Series 73 Endura-Shield, an aliphatic acrylic polyurethane that resists weathering, and a finish coat of Series 1070 Fluoronar, high-solids fluoropolymer coating that resists ultraviolet (UV) light while providing outstanding gloss and color retention.

“Both the red and maroon were custom colors that we matched from the original coatings,” Goulet recalled. “All of the coatings were applied using brush and rollers.”

Gray colored sections of the sculpture received a barrier coat of Series 27 F.C. Typoxy, a polyamide epoxy coating that offers fast curing and rapid handling capabilities. These areas were also topcoated with Series 1070.

“The whole team at NexGen helped during different phases of this project, from coating selection to color matching,” commented Goulet. “We’ve worked together to provide the coatings on several sculptures in the area.”

Fluoropolymer coatings were specified for two other Tennessee sculptures. Mark di Suvero’s “Tumbleweed,” a red steel abstract sculpture located on the Vanderbilt University campus in Nashville, was recoated with Series 1070 Fluoronar to retain its color and gloss.

“All three of these projects were driven by the coating contractors,” Goulet added. “In each case, the contractor was looking for coating products that offered long-term performance without fading.”

A high-solids fluoropolymer coating that provides an ultra-durable metallic or pearlescent finish. It has outstanding color and gloss retention even in the most severe exposures. Under certain [...]