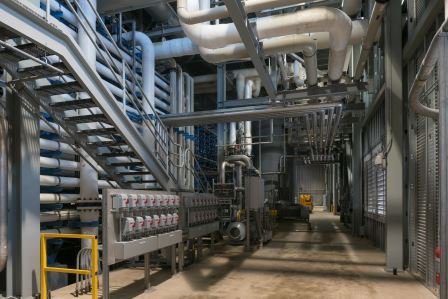 With its dedication in December 2015, the $1 billion Claude “Bud” Lewis Carlsbad Desalination Plant opened a spigot to the Pacific Ocean, creating a new, drought-proof source of drinking water for 3.1 million people in San Diego County, California.

As the largest ocean desalination plant in the nation and Western Hemisphere, the Carlsbad Plant is considered the future of water desalination in the U.S. by its proponents. Citing officials of the International Desalination Association, the Los Angeles Times reported, “San Diego is the epicenter of desalination and water reuse development in the U.S.A., and the undisputed birthplace of commercial reverse osmosis.”

According to an article in The San Diego Union-Tribune, the plant represents the “mainstreaming” of seawater desalination in California. “About 15 other desalination projects have been proposed for the state’s coastline, from the San Francisco Bay Area to Southern California,” the Union-Tribunearticle observed.

Located adjacent to the NRG Energy’s Encina Power Station in Carlsbad, the desalination plant uses the same water intake system used to draw cooling water from the ocean into the power plant. After the water is filtered for sediments, it is pumped through plastic-coated reverse osmosis membranes that remove more than 99 percent of the salt and other minerals.

“To produce 50 million gallons per day of fresh water, Carlsbad will draw in 100 million gallons of seawater,” The Sacramento Bee noted. “The difference is returned to the ocean as discharge water, but with it salinity doubled.”

Desalinated water is fluoridated and chlorinated in preparation for delivery to the San Diego County Water Authority, which has a 30-year Water Purchase Agreement with the plant’s developer and owner, Poseidon Water. A private company, Poseidon Water specializes in developing reverse osmosis seawater desalination plants.

The Water Authority started exploring the potential for a desalination plant in the early 1990s. “This pioneering project is the result of more than 17 years of planning, permitting and construction,” stated Poseidon Water Chief Executive Officer Carlos Riva in a news release. “It required teamwork between Poseidon Water, the Water Authority, our contractors, NRG Energy, and the cities of Carlsbad, Vista and San Marcos.”

“I was first involved back in 2005-2006 with coating contractor Parada Painting,” Amyot observed. “In 2007, I provided Parada Painting budget numbers on a variety of coating systems that were eventually used on the project. It took six to seven years to determine the project’s feasibility.”

The plant’s concrete surfaces were patched and filled with Series 218 MotarClad, an epoxy-modified cementitious mortar, to eliminate voids and bugholes, prior to being topcoated with high-performance epoxies or polyurethanes.

“Holiday testing was performed on all the concrete tanks,” Amyot added. “Coating specifications included 19 color designations, ranging from grays and browns to safety red, yellow and orange. When you look at this plant, it’s impressive.”

“In the next 10 years, you are probably going to have three big plants built in Southern California and another plant or two in Northern California,” suggested Tom Pankratz, editor of the Water Desalination Report newsletter. “The trend is toward more desal. They are the most reasonable insurance policy against a long, protracted drought.”

An advanced generation epoxy for protection and finishing of steel and concrete. It has excellent resistance to abrasion and is suitable for immersion as well as chemical contact exposure. [...]

A user friendly, low VOC, aliphatic polyurethane coating that provides excellent color and gloss retention for exterior applications to steel, concrete and other substrates in commercial, [...]

A high-performance, aggregate reinforced material for surfacing, patching and filling voids and bugholes in concrete substrates. Generally topcoated with a variety of high-performance epoxies [...]

An advanced generation, 100% solids, high-build epoxy for the protection of steel and concrete. It provides excellent resistance to abrasion and is suitable for immersion service in potable [...]

Innovative potable water coating which offers high-build edge protection and allows for application at a wide range of temperatures (down to 35°F or 2°C with 44-700 Accelerator). For use on the [...]

A highly chemical- and solvent-resistant colored novolac glaze coating for walls, floors and other surfaces. Provides improved aesthetics and additional protection against abrasion, impact, and [...]