KeyBank Discovery Theater at the Imagination Station in Toledo, Ohio

When patrons enter the KeyBank Discovery Theater at the Imagination Station in Toledo, Ohio, they’ll certainly acknowledge the size of the 8,200 square foot building. They’ll probably admire its architectural beauty and enjoy everything it offers inside. They may not, however, notice the hundreds of gallons worth of Tnemec high-performance coatings around the structure.

The Imagination Station is a non-profit, hands-on science museum located on the Maumee riverfront in downtown Toledo, Ohio. With a focus on science, technology, engineering and math (STEM), its 300 exhibits provide a place for children of all ages to explore and learn.

In 2019, construction began on a privately funded $12 million addition to the Imagination Station, the single largest addition to the building since its opening. The KeyBank Discovery Theater is an 8,200 square foot building consisting of a premium large format theater, a projection room, an expanded concourse, concessions, restrooms, and retail space. The theater allows visitors to experience video and audio in a variety of formats on the 58-foot wide, 4k screen with laser projection. It provides everything from movies for entertainment and documentaries for educational purposes to guest speakers, virtual learning and more.

Some of the films shown at the theater have included Journey to Space, which takes audiences on a behind-the-scenes tour of the international effort to send astronauts to Mars, culminating in a virtual voyage to Mars, and Hidden Pacific, which profiles some of the Pacific Ocean’s most beautiful islands and monuments leaving audiences with an appreciation for the beauty of nature untouched by civilization. 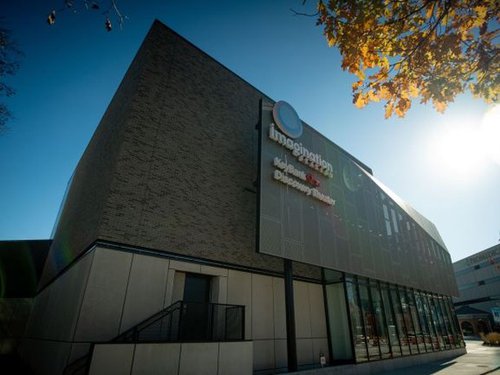 While technology plays a role in the immersive experience, none of it would be possible without the building itself. The project was a massive undertaking, completed by a team of several contractors, architects, engineers and other crew members over the course of almost two years.

The building used a variety of materials, including concrete foundations, columns, beams and walls, structural masonry walls for the theater perimeter, structural steel for theater and roof supports, and more. Although a number of materials were used, steel was incorporated into a majority of the building. The project team knew they needed high-performance coatings systems that could protect the steel from corrosion and UV light exposure. That’s when the architecture firm, The Collaborative, reached out to Tnemec to determine the best systems for the project.

As with any other project, the steel structures first needed to be prepped. The steel prep began with SSPC-SP 6/NACE No. 3 Commercial Blast Cleaning. Once the surfaces were prepared, the team could begin coating the structure. Portions of the steel were first coated with Series 90G-1K97 Tnemec-Zinc, an advanced technology, single-component, moisture-cured, zinc-rich primer. This primer is known for its performance and user-friendly application. It was applied to a thickness of 2.5 to 3.5 mils.

In some areas, Series 1224 Epoxoline WB was used to prime the steel. Series 1224 is a patented, advanced generation, water-based epoxy coating that is low odor, low VOC and specially formulated with corrosion inhibitive properties for long-term protection of steel.

Surfaces primed with Series 1224 were followed by three coats of Series 971 Aerolon Acrylic, a fluid applied thermal break coating. The thermal break technology was important in the portions of the building where the steel ran from the exterior to the interior as it helps control temperature transfer through the steel from outside. 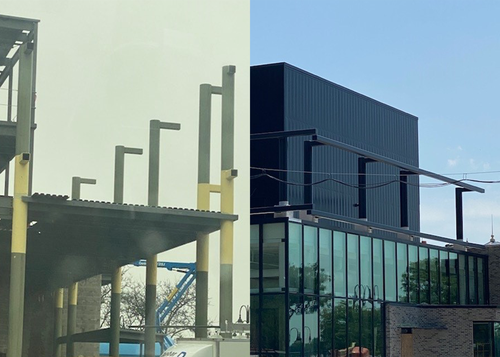 Aerolon utilizes special insulating particles for exceptional performance. Throughout the life of the coating, it will reduce issues associated with corrosion and mitigate the effects of thermal bridging by controlling condensation. It was applied to a thickness of 150.0 mils and more than 100 gallons were used to coat the steel.

In other areas, where Aerolon wasn’t used, the team applied Series N69 as an intermediate coat and a finish coat of Series 1072V Fluoronar. Fluoronar is a low VOC, fluoropolymer coating that provides an ultra-durable finish.

Tnemec is currently involved in a number of projects in the Toledo, Ohio area, helping breathe new life to the city. The Glass City River Wall mural is one such example of how Tnemec is helping paint the city in a big way.

ADM, a Chicago-based corporation recognized as a global leader in nutrition, operates a grain silo facility on the east bank of the Maumee River, which is visible from Interstate-75, the river and downtown Toledo. In an effort to tell the story of Toledo’s diversity and vibrant spirit, while incorporating the mission of ADM, muralist Gabe Gault was hired to design a giant mural on the grain silo structure. It will span all 28 silos or about 170,000 square feet of space; it will be the largest mural in the United States when done and is the largest mural project Tnemec has ever been involved in, with more than 2,500 gallons of paint.

Tnemec continues to provide its high-performance coatings to meet the needs of projects across the country. Whether it’s a state-of-the-art theater or a giant mural on the river, Tnemec products are designed to help get the job done.