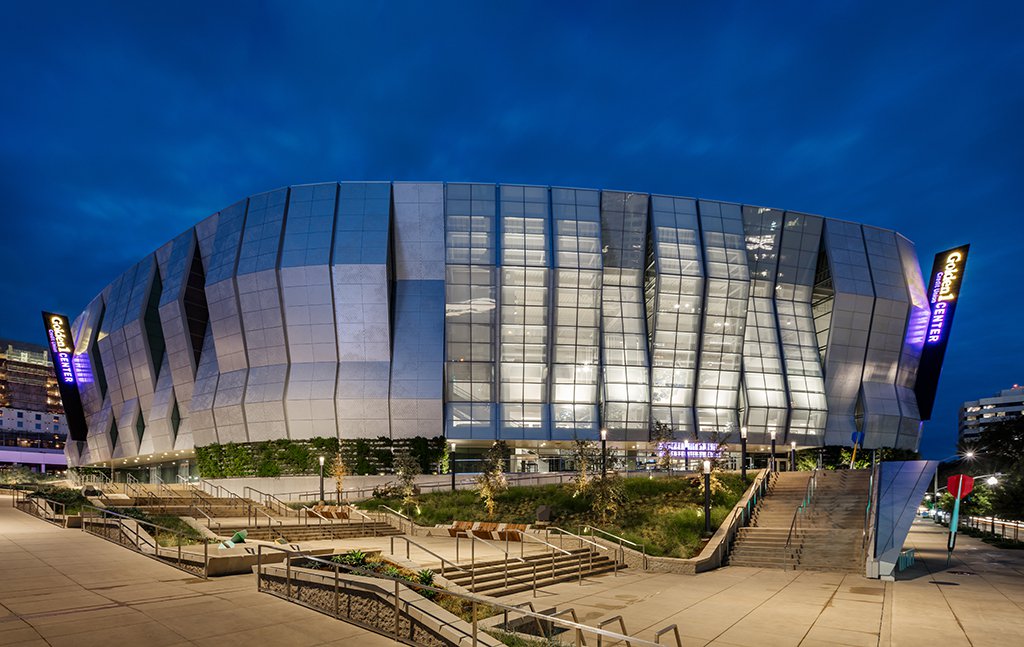 When it comes to sustainability, the new home of the National Basketball Association (NBA) Sacramento Kings scored a slam-dunk by becoming the first indoor sports arena to achieve Leadership in Energy and Environmental Design (LEED) Platinum certification.

“LEED Platinum is given to projects that meet strict standards in energy use, water efficiency, transportation impacts and the materials used in construction,” the Sacramento Bee reported. “Golden 1 Center is officially the ‘greenest’ arena in the country.”

Named for Golden 1 Credit Union, the $556 million arena is 100 percent solar powered and uses 45 percent less water and 30 percent less energy than required under California regulations, according to the Bee.

“Golden 1 Center will be powered during the day by solar panels on the building’s roof,” the Bee explained. “A new 11-megawatt solar farm built by the Sacramento Municipal Utility District on its Rancho Seco property in partnership with the Kings will generate the power to offset electricity used at the facility during evening events.”

Ultra-low flow plumbing captures grey water for irrigating an open plaza outside the arena, noted inhabitat.com, a weblog devoted to the future of design.

“Water conservation will result in a 45 percent reduction in use over what California code requires,” inhabitat.com shared. “There are also living wall gardens lining the exterior of the arena consisting of local plants and edibles that are watered via a drip irrigation system from water runoff collected from the roof.”

Citing an environmental impact analysis of the Golden 1 Center site, Arena Digest magazine reported that a total of nearly 2,000 fewer tons of greenhouse emissions will result from locating the arena in downtown Sacramento.

Another energy-saving feature by arena designer AECOM is a displacement ventilation system that improves fan comfort by channeling conditioned air through vents located directly beneath their seats. The system allows people in the stands to use an app on their phones to influence the temperature in their specific seating section.

“Fans can use smart devices to interact with the team, order food, find the shortest lines, and share experiences on social media,” an AECOM design fact sheet stated. “The Wi-Fi system offers internet speeds 17,000-times faster than the average home, making it the world’s most connected fan arena.”

The arena features two open concourses that provide fans with 360-degree views of the court, as well as the city through windows and five six-story tall aircraft hangar doors at the entrance to the arena. Manufactured in Minnesota, the doors open the arena to natural cooling during concerts and entertainment events.

Special care was taken to achieve an “architectural aesthetic” on the hanger doors and throughout the arena, explained Pete Trevino II, coatings project manager and estimator with Sacramento-based Valdez Painting, Inc.

Most of primer and finish coatings specified for the arena contained less than 100 grams per liter of volatile organic compounds (VOCs).

“It was used on galvanized sheet metal decks, structural steel and cementitious fireproofing,” Trevino recalled. “The high-performance coating was spray-applied with crews working from swing stages and 185-foot tall cherry pickers that reached the steel at the top of the bowl.”

Gray, white and “arena silver” were the primary colors used for the project, in addition to the Pantone PMS 123 athletic gold coating that spells out Golden 1 on the arena’s roof.

“We ended up using Series 1095 with a clear coat finish for the rooftop lettering to provide the UV resistance that was needed,” Trevino said.

“It was a great project,” Trevino acknowledged. “We’re glad we had the opportunity to work with the Kings, with the general contractor Turner Construction, and with Tnemec, which provided a high level of customer service. Tnemec rushed orders for us and we received a quick turnaround from the company’s warehouse in Compton, California.”

The project required careful coordination between Darrell Buerky of Midwest Coating Consultants, Inc. in Kansas City, Missouri, and Sherry Amos of Amos and Associates in California, who were supported by other Tnemec representatives in Minnesota and Arizona.

“I worked on the coating specification with the architect and Sherry was on-site to assist the coating contractor with any application issues they encountered,” Buerky observed. “One of the things that makes Tnemec so effective is the way we coordinate projects among various offices across the nation.”

Amos echoed this view adding, “Due to the size of the project and the tight time frame, different fabricators had to be used. I became involved when there were issues with primer touch-ups, or when a weld area needed to be sanded and touched up. We solved every issue as they arose.”

A user friendly, low VOC, aliphatic polyurethane coating that provides excellent color and gloss retention for exterior applications to steel, concrete and other substrates in commercial, [...]