Tank 'Beaks' the Competition to Win 2016 Tank of the Year 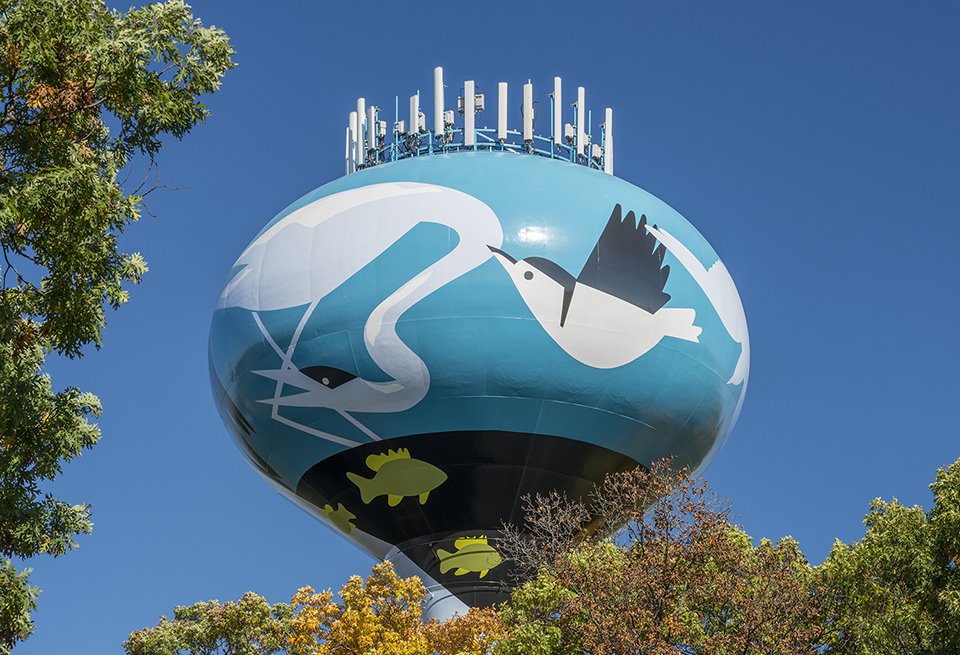 After a year of unfortunate water news in the state of Michigan, one water tank in Ann Arbor, Mich., is receiving some much deserved attention. In October, the 500,000-gallon-tank on Manchester Road was selected as Tnemec Company’s 2016 Tank of the Year.

This tank was repainted last year with a design that pays homage to the wildlife of its surrounding water systems, namely the Huron River. Illustrator, designer and lecturer Bill Burgard designed the blue sky, birds and fish depicted on the tank. Burgard’s design was chosen as the winner of the City of Ann Arbor’s ‘Art in the Sky’ contest, which allowed local residents the opportunity to create the mural for the water tank repaint. Nearly 600 entries were entered into the contest.

“I really felt what was up there should reflect what’s local and what we think of when we think of our water system,” Burgard said. “I also wanted the design to wrap around the entire tower rather than adorn just one side of the tank.”

Burgard’s art includes a swan, sandhill crane, woodpecker, bird of prey and bluegill fish. One of the birds was not in the original design, but was added later to accommodate for the tank’s circumference, according to Burgard.

Prior to coating, the tank was fully contained and prepared, removing all aged coatings and rust. The project team prepared the exterior steel in accordance with SSPC-SP10/NACE No. 2 Near-White Metal Blast Cleaning. They then utilized a high-performance coatings system from Tnemec.

“I worked with the applicator to choose the finish colors,” said Burgard. “I was concerned about the contrast between colors and needed them to match the design.”

Series 700 HydroFlon was applied as the finish coat for the tank’s design. The painting contractor, L.C. United, from Sterling Heights, Mich., applied the coating at 2.0-3.0 mils DFT with the help of oversized stencils in the shape of the Burgard’s design.

“Series 700 was the best choice for the tank’s extensive design,” said Anthony Hartwig, Coating Consultant with Tnemec. “This product is formulated specifically for water tank exteriors and will provide unsurpassed color and gloss retention.”

The Manchester Road tank garnered some immediate media attention upon completion and even more during the 2016 Tank of the Year contest. The tank was among 246 water tanks nominated across the U.S. and Canada.

As part of the Tank of the Year contest, all nominees were posted in an online poll that received more than 18,000 views and the tank that received the most votes in this ballot was named the 2016 People’s Choice.

This year’s highest-voted water tank was a patriotic elevated tank in Houston County, Georgia, which collected 763 votes during the ten-day online contest. The tank also received an automatic bid to be considered as a finalist for the official Tank of the Year crown.

Other runners-up included Champaign, Ill.; Durand, Mich., Garnavillo, Iowa; Gulf Shores, Ala.; La Porte, Texas; Laurens, S.C.; Lumberton, N.C.; Olathe, Kan.; Ontario, Calif.; and York, Neb. All nominees were considered for Tank of the Year based on criteria such as artistic value, significance of the tank to the community and interesting project challenges.

“The owner and engineer were very excited to hear that they’d won the Tank of the Year award,” said Hartwig. “We’re proud to see the title finally go to a water tank in our great state of Michigan.”

The 2017 Tank of the Year contest will begin taking nominations in March. For more information about the competition, visit www.tnemec.com/tankoftheyear.