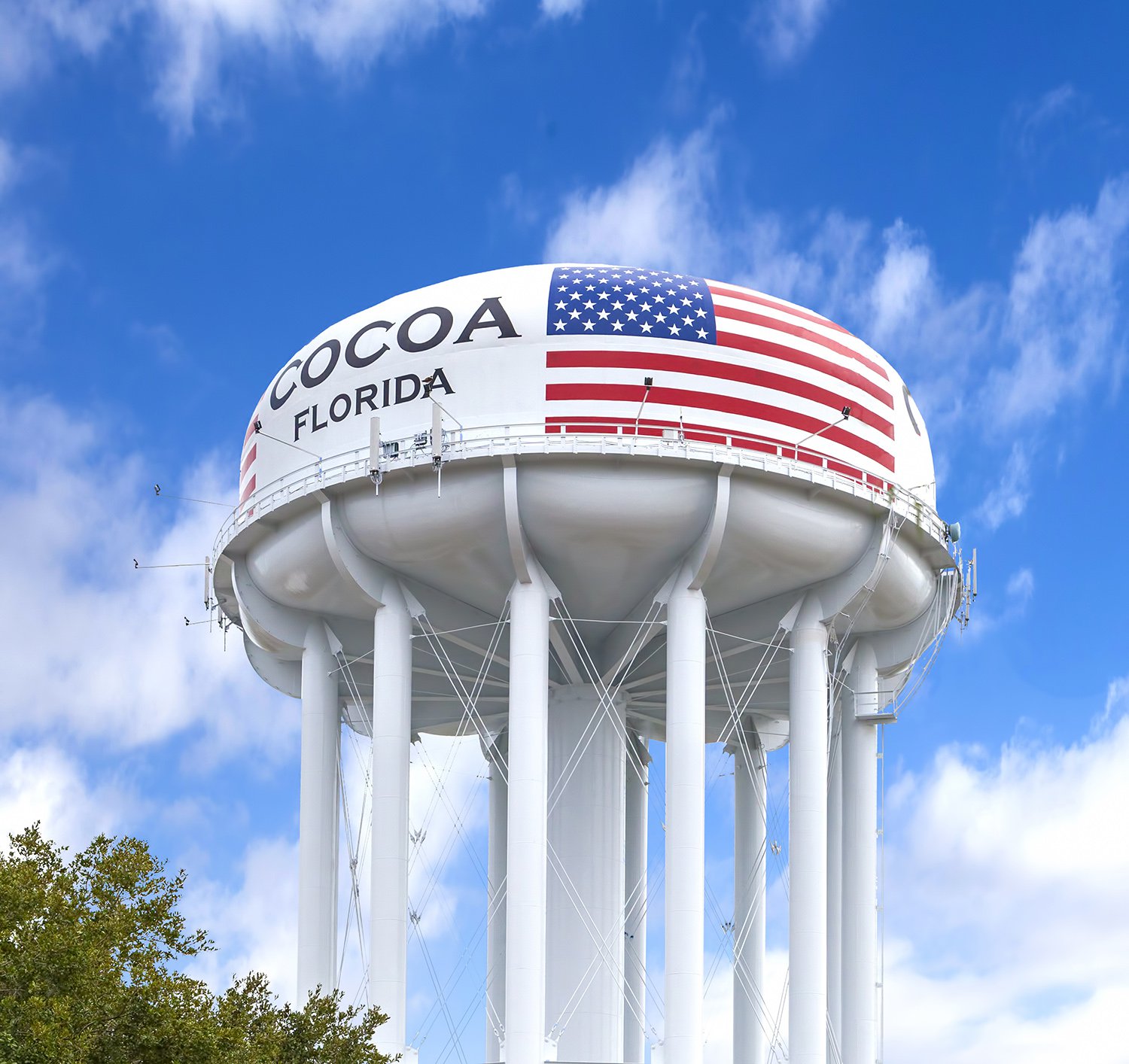 When the 1.5-million-gallon water tank in Cocoa, Florida, was originally built in 1957, the last thing on anyone’s mind was that one day it would be the winner of a national contest. But, more than fifty years later, after a recent renovation using high-performance coating systems from Tnemec, the flag-adorned tank has garnered the support of its community and earned the title of 2015 Tank of the Year.

Located on Florida’s east coast near the John F. Kennedy Space Center, the 156-foot-tall water tank was originally constructed to supply drinking water to a developing NASA space program. In 1976, the tank became a community landmark after Old Glory was painted on it to commemorate the nation’s Bicentennial. The flag on the water tank has since been tripled and now three larger-than-life American flags surround the structure.

“This water tank is a big deal in our town,” commented Samantha Senger, Public Relations Specialist for the City of Cocoa. “When the project began and it was contained for surface preparation, people were concerned. There were a lot of inquiries as to what would happen to the tank’s flag design.”

According to Senger, Cocoa hired an outside firm several years back to come in and help create a new logo and brand for the town. When they suggested removing the flags and replacing them with the City’s new logo, the proposition was denied and the town’s logo was only slightly updated. The flags were to remain; only the text on the tank would be changed from ‘City of Cocoa’ to ‘Cocoa, Florida.’

The structure’s exterior was prepared in accordance with SSPC-SP 6/NACE No. 3 Commercial Blast Cleaning. Exterior steel then received a prime coat of Series 90G-1K97 Tneme-Zinc, a moisture-cured, zinc-rich primer that is single-component for easier application, followed by an intermediate coat of Tnemec’s next-generation water-based epoxy, Series 27WB Typoxy.

In an effort to extend color and gloss retention beyond the demonstrated performance of a urethane finish coat, the City decided to utilize an advanced solution fluoropolymer finish, Series 700 HydroFlon. This coating outperforms other finishes for water tanks, offering unprecedented protection against weathering and UV light degradation. Using Series 700 in Old Glory Red and Blue, the flags were repainted on the tank to scale.

“Based on the importance and the cost of this renovation, the owner wanted to make sure that they had the best system available to extend the tank’s maintenance cycle,” said Bill Langer, Tnemec coating consultant in Florida. “We were able to show them the options and they chose the finish with the highest performance characteristics.”

During the Tank of the Year contest, over 200 water tanks were nominated and placed online, and all nominees were then voted on by the public to determine the top twelve tanks for the year. The Cocoa tank was among the twelve top-voted tanks, as were tanks in the following cities: Plant City, Fla.; Cedarville, Ohio; Nobleton, Ontario, Canada; Lebanon, Mo.; Zebulon, N.C.; North Newton, Kan.; Amboy, Ill.; Oak Grove, Mo.; Chesterfield, Va.; Carrollton, Texas; and Mont Belvieu, Texas. All of these finalists are being featured on a month in the annual Tank of the Year calendar.

A panel of water tank enthusiasts judged the tank finalists based on artistic value, significance to the community, and the challenges encountered during the projects. The tank in Cocoa earned the majority vote and was crowned Tank of the Year because of the community’s reaction, the tank’s storied history, and the skill that was required during containment, preparation, and coating phases.

“Because this tank is so large and has 12 legs, the scaffolding required for the recoat was extensive,” recalled Langer. “The contractor, Worth Contracting, Inc., did an excellent job of meeting deadlines during all phases to ensure the coating system was applied correctly and without issue.”

The tank was completed in June 2015 and shortly thereafter was submitted by Langer for the Tank of the Year competition.

“Once we heard about the contest, the town really got behind the idea,” remembered Senger with City of Cocoa. “The Mayor got ahold of the contest information and shared it on Facebook and Twitter and it was great to see the response it generated. The water tank received most of its votes in a few days.”

During the contest, the Cocoa tank received 2,045 votes out of the contest’s total of 20,703 votes. The town is very pleased with their renovated water tank and now, after winning, the mayor regularly refers to his city as ‘Home of the Tank of the Year,’ according to Senger.

The tank’s popularity is partially due to its location, situated on the coast near the intersection of U.S. 1 and State Road 520. The tank supplies half of Brevard County’s water supply and is the source of water for Cocoa Beach, Port Canaveral, and even space missions that begin at the Kennedy Space Center.

The Cocoa tank has been painted four times since its initial construction, each time using a top-of-the-line coatings system from Tnemec. In a patriotic salute, Tnemec donated the blue and red paint used in the previous repaint in 2003.

“Tnemec is proud to have its coatings associated with such an iconic tank for so many years,” stated Doug Hansen, Director of Sales - Water Tank Market, for Tnemec. “This was the tenth anniversary of the Tank of the Year contest and we look forward to seeing more creative tanks for years to come.”